We’ll see if this mascara lives up to the company’s claims!

Having received a sample from my local Bobbi Brown counter, the container is smaller than the actual size, but the wand is the same. It appears to be your standard cylinder-shaped mascara wand — no frills here: 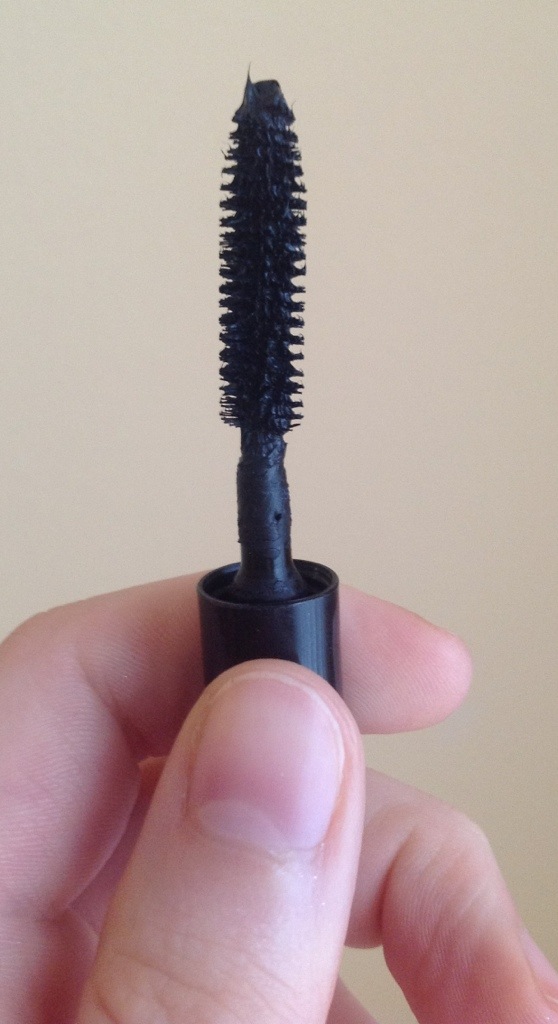 This mascara, in the shade “Blackest Black,” adheres smoothly to the lashes. I disagree with the statement that it delivers “thicker, fuller, bolder lashes” in a single stroke….but it DOES deliver them with 3 coats!

Very nice indeed! This mascara does frame the peepers with a glorious dark fringe. It delivers volume and length — albeit with 3 coats. Of note, I experienced no clumping, smearing, or fading as the day progressed. “Smokey Eye Mascara” is not a holy grail mascara in my opinion, but it is a very good one — and well worth the purchase. The perfect finishing touch to a smokey eye 🙂

Now available at Nordstrom.com for $28. Coming to Sephora and Bobbi Brown counters in October 2013

Disclosure: Special thanks to Mrs. Donna at my local Bobbi Brown counter for furnishing the sample! 🙂 As always, the opinions expressed in this review are my own.

I have a scandalous new product to review today!

It’s a mascara from Too Faced Cosmetics…….

As you can see in the promotional ad above, the sleek pink packaging, with an hourglass-shaped mascara wand, is quite reminiscent of a Victoria’s Secret campaign, continuing the provocative theme.

Ready to test the product!

Lashes (with 2 coats of mascara — top lashes only):

Very impressed by this mascara. No clumping at all, even though 2 coats applied. It thickens and lengthens lashes to conjure a “false lash” effect, all the while doing a reasonable job separating the individual lashes. As icing on the cake, it lasts very well throughout the day — without a hint of smearing.

For lash drama, THIS IS IT.

Available at Sephora, ULTA, and toofacedcosmetics.com for $23